When you sit down with Upper School Studio Art Teacher, Amy Diaz Newman and Senior Hannah Blanco, you might notice that they share a physical resemblance— perhaps they could be cousins or sisters. Once they begin to speak, you’re struck by how they seem to have a similar internal rhythm. It is easy to feel the depth of the bond and mutual respect between student and teacher. Amy attributes this connection to something “sort of magical,” that seemingly linked the two before they had even met each other.

“Hannah’s parents took her to a lot of concerts and events as a child and unbeknownst to either of us, we both happened to be in various places at the same time,” says Amy. “We both saw Joanna Newsome, a harpist and singer, perform at an amazing concert in Philadelphia. I was there with my husband and Hannah was there as a 7-year-old,” she explains. “Obviously, we didn’t know each other, but we bonded over the fact that we both love this artist and we were both there.” This is only one of several examples of their coincidental overlaps. Amy reflects, “Hannah is kind of an old soul and she’s familiar with a lot of pop culture, music, movies and things that are dear to me and my generation.”

Hannah came to AFS in the ninth grade, a short time after her mother passed away from cancer. Hannah’s previous school was small and the idea of going to another school, let alone a big public school, was terrifying. She joined Amy’s advisory at the start of her ninth-grade year and says, “AFS was reassuring and I felt comfortable.” In advisory, groups of 8 to 10 students are together for homebase and various activities throughout their time in Upper School. Amy describes this advisory time as “a unique opportunity for interpersonal relationships to develop.” Amy says, “We have conversations as an advisory about things that are happening in the school community or in the world that are more authentic. [It is an] opportunity for people to have a safe space to talk about things from the heart.”

Hannah also became a student in many of Amy’s visual art classes over the course of her time at AFS. For this story, the two collaborated to create a piece of art as a visual representation of their relationship. Hannah loves creating artwork around very detailed, small objects and brought in several items she found in nature from her personal collection to consider using in the joint piece with Amy. They settled on a colorful seed pod that Hannah painted; Amy drew a pencil sketch of Hannah where she is holding the pod. “I hadn’t made a serious drawing in a while so it was good to have a catalyst to do that,” shares Amy. “It feels special because it’s the last year I’ll be with Hannah; she has been a really lovely student to teach. I could really put my heart into it. 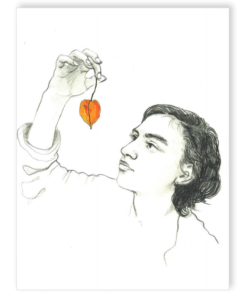 Amy described the creation of the piece as typical of their collaborations, where there is push and pull and they challenge each other. She talked Hannah through a hesitant moment when it came to using watercolor on the piece. Hannah says, “Watercolor is so free and it’s hard to control where it goes and I like control. So, it’s fun to play with because it challenges me in having to be okay with it drying right there and I can’t change how it looks.” This push and pull element of Amy and Hannah’s relationship goes beyond the art classroom. Hannah notes, “I had some struggles in my math courses and I was super stressed and thinking I shouldn’t be here. Amy was very adamant about me not [switching my class] and made sure that I stuck with it. I tried harder and I improved. She always pushes me to not give up even if I’m a little stressed or feeling like I’m not good enough. I think that’s going to be important in college. It is going to be a big change and I’m going to have classes that challenge me and now I have it in my head: don’t give up, keep trying and push yourself.”

Hannah plans to study Marine Biology in college and says, “I am definitely going to take art classes, but I think that’s a solid part of my life that’s been consistent and I’m okay with it not being the only thing in my life. I’m really drawn to science and nature.” On the notion of Hannah heading off to college, Amy says, “I think that it’s letting the little bird go. I’ll be excited to hear about her life after AFS and I have confidence in her, so it’s easier to end this phase of our relationship knowing that she’s so talented and capable.”

Read more about The Power of the Personal in Education in the Winter issue of our Oak Leaves magazine.