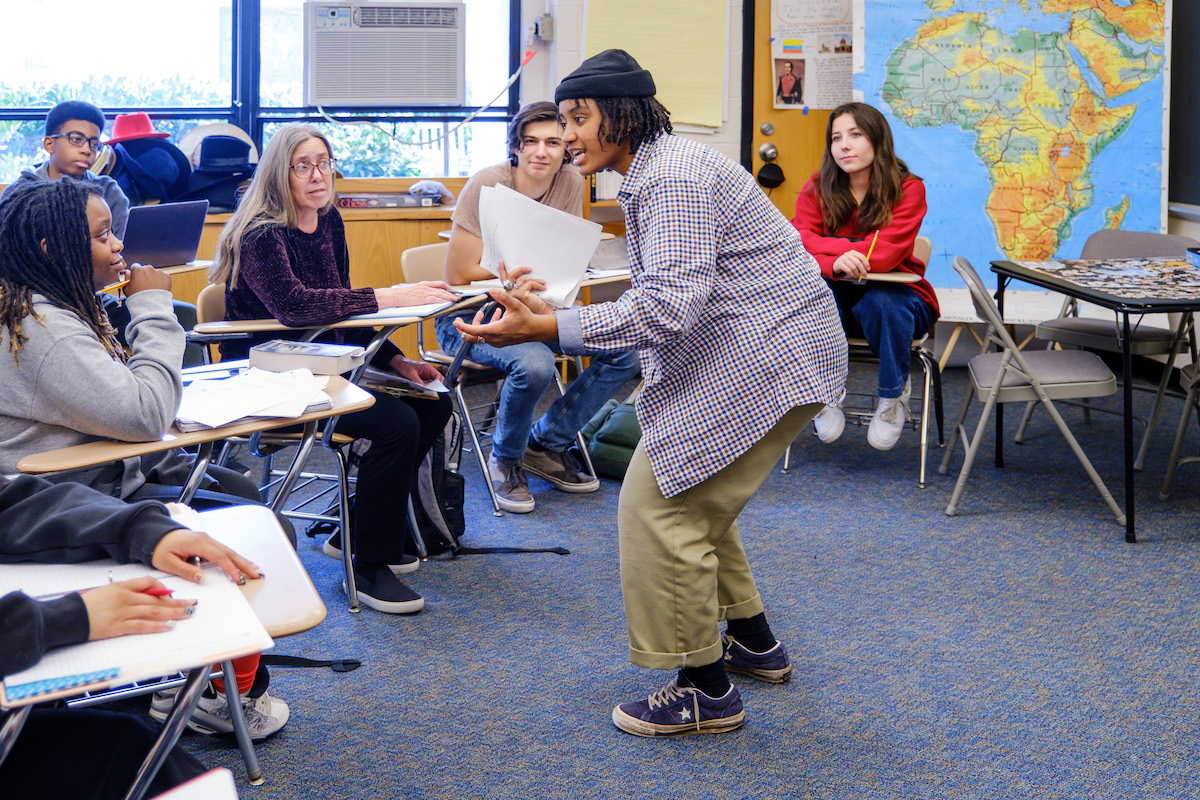 Throughout my high school experience, I have been equally dedicated to my academics, as well as co-curricular activities. Of the co-curricular activities that I am a part of, diversity equity and inclusion work, has been the work that I pour most of my energy into. Doing this work has taught me to seek equity and inclusion in everything that I do and love. As I became more engulfed in the work, the things that I learned from attending diversity conferences, clerking Black Student Union, and co-facilitating workshops with peers began to spill over into my academics.

This shift in thinking occurred most notably in my history classes. By sophomore year, every single unit we learned, I asked the question, “What were black people doing and thinking during this time?” The way I had been taught history in the past was that African-Americans only existed during slavery, the Civil Rights Movement, and the Obama presidency. Because of this lack of representation, I was fairly unengaged in what I was learning, as everything felt the same. However, I still had this underlying love for history, learning, and historical analysis. This is why at the end of my sophomore year, when presented with the opportunity to write an independent research paper, I was extremely excited. I would finally be able to learn about people who looked like me, focusing on a topic of my choosing.

For the project, I chose to look into non-peaceful forms of protest during the Civil Rights Movement of the 1960s. My goal for this project was to study something I had never learned about before, and essentially stay as far away from Martin Luther King and Rosa Parks as I could. By the end of the project, I had written a seven-page research paper about Martin Luther King. The reason that I had wound up studying what I tried to stay away from was the lack of resources available to me and the time that I had to finish the paper.

By junior year, I was not taking any history classes so that I could focus on other things. I became dedicated to the Black Student Union, becoming clerk that same year. Following the summer of 2020, the call for an African-American history elective became louder and louder. This is when my fellow clerks and I met with Margaret to discuss an African-American history course. This is where the idea came about. Although there would not be a course for the 2021-22 school year, we could conduct an independent study. Doing this, I was presented the opportunity to study black history beyond Martin Luther King, and learn about topics I was interested in, beyond the limited resources of a sophomore history class.

Independent study is one of my favorite “classes” I have taken as a student at AFS. In the past few months, I have studied different approaches to black liberation as well as black joy. Not only am I getting to look into topics about African-American history, but I am also creating lessons to teach in the official class next year.

For the topics I chose, I tried to focus on holding African-American history in a positive light, as opposed to the usual history curriculum of slavery, civil rights and Obama. For example, I recently researched black music as a vessel for joy. I chose to look into DJ Jazzy Jeff’s song “Summertime” because I felt that the lyrics displayed black culture and joy without explicitly stating it.

Furthermore, I wanted to focus on topics that had to do with the intersections of my identities, as well as other student’s identities. For example, this included black queer history and black art. I wanted to break down the narrative that there is only one way to be black. This is why the student voice is so important. I was able to bring a lot of my identities and interests to my research.

If I were sitting in history class in my freshman and sophomore years, learning about black queer womanist movements, reading Bell Hooks, or listening to rastafarian punk band Bad Brains, I would have been much more motivated and engaged with the material. I feel this is true for other black students as well, which is why it was so important that Gabby and I help in building this class. African-American history created by black students makes this course special because we had control over what we would learn, what it would focus on, and the lens in which it would be taught.