Alumnus, Miles Butler ’09 taps into his Quaker education to bring music into prisons and correctional centers

Miles Butler graduated from AFS in 2009. He is now a professional musician and c0-founder/director of Songs in the Key of Free. The nonprofit organization brings musicians, songwriters and classically-trained musicians into Pennsylvania prisons to develop and celebrate the musical talents of incarcerated people through workshops on 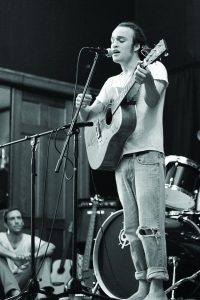 composition, arrangement and  and musicianship. Miles is also the owner of Germantown Espresso Bar and a member of Gobble Ghoul, an indie rock band, alongside fellow AFS alumni Luke Butler ’06, Gabe Greenberg ’09 and Nick Manta ’09.

“I often reflect on how my time at AFS has shaped me. For me, Abington Friends School instilled a great sense of community and stewardship for the greater world. I was also deeply involved with the performing and musical arts where I grew my ability on and off stage,” expressed Miles.  He continued, “While working with people who are incarcerated or caught in the opioid epidemic, I often come back to the idea that there is an eternal light in each of us. That we are all deserving of love, patience, and redemption. AFS not only allowed for my artistic self to flourish but also solidified roots bound in Quaker philosophy.”

Here is a documentary-style video about Songs in the Key of Free, which brought a series of composer/musician workshops to The Pennsylvania State Correctional Institution at Graterford.