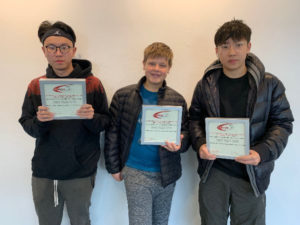 The hard work of Abington Friends School’s Mathletes team has added up to some exciting performances in recent student math competitions. Nine students traveled to a new competition, named ATMOPAV (Association of Teachers of Mathematics of Philadelphia and Vicinity) in December 2019, where a total of 14 teams, from 5 different local public and private schools, worked to answer 15 problems in an hour. AFS teams took first, second and seventh places!

In addition to the weekend competition, the Matheletes have been participating in an online competition called Math Madness. It’s a bracket style tournament with competitors from more than 600 high schools across the nation. Erin Bengtson, Upper School Mathematics Teacher and Mathematics Department Chair says, “These competitions have added new focus and excitement to the Mathletes club this year, and we’ve had steady participation from about 15 upper school students.”

Co-clerk of Mathletes, Joie Li ’20 (who actually sat out over the weekend due to the interest in participation), says of both competitions, “So far we’ve had two wins and one tie, which is a very strong start! Besides the fact that everyone on the team has a solid math foundation and a true passion for problem-solving, I think we’ve built trust, friendship, and a collaborative environment through our weekly Math Madness meetings.”